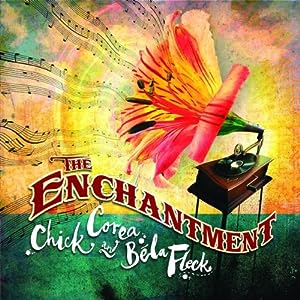 $3.86
As of 2021-06-17 12:56:14 UTC (more info)
Not Available - stock arriving soon
Buy Now from Amazon
Product prices and availability are accurate as of 2021-06-17 12:56:14 UTC and are subject to change. Any price and availability information displayed on http://www.amazon.com/ at the time of purchase will apply to the purchase of this product.
See All Product Reviews

Fans of legendary jazz pianist Chick Corea and bebop/bluegrass banjo virtuoso Béla Fleck are well aware of the pair's previous collaborations (Corea guests on two Flecktones albums, and Fleck appears on Corea's Rendezvous in New York DVD), but their first full-length release should surprise even their most jaded followers. The two went into the project with intense seriousness of purpose, Corea writing four pieces and Fleck six. (The standard "Brazil" is their only cover.) They push each other hard in adapting their instruments to genres (bluegrass, country, Latin, ragtime, classical, blues, and world) normally outside their idioms, Corea playing 'grassy banjo patterns on the piano on Fleck's mournful "Mountain" and Fleck stretching on Corea's suite-like "Joban Dna Nopia." With few exceptions, the compositions are only frameworks for vast improvisation, which might be expected. But instead of setting each other up for extended solos, Corea and Fleck join together with breathtaking precision and verve, weaving and intertwining through remarkable contrapuntal excursions, only to break and meet up again in perfect sync. Despite the thrill of Fleck's chromatic chases and classical flirtations and Corea's mastery of difficult lines on Fleck's rippling "Spectacle," one can't help but think they would have benefited from a tad more instrumentation--especially bass and percussion. Perhaps that's the next step this wickedly inventive duo wll take in their ongoing odyssey of genius. --Alanna Nash

Come Fly With Me