The Departed (Music From the Motion Picture) 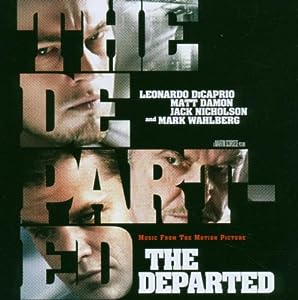 The Departed (Music From the Motion Picture)

$4.22
As of 2021-07-01 01:46:31 UTC (more info)
Not Available - stock arriving soon
Buy Now from Amazon
Product prices and availability are accurate as of 2021-07-01 01:46:31 UTC and are subject to change. Any price and availability information displayed on http://www.amazon.com/ at the time of purchase will apply to the purchase of this product.
See All Product Reviews

The Departed has been hailed as director Martin Scorsese's most powerful film since Goodfellas. With critical acclaim, major stars and all the punch of an explosive crime drama, The Departed is set to be a box-office smash. The soundtrack album features songs from all-time greats The Rolling Stones, The Beach Boys, The Allman Brothers Band, Roy Buchanan and Badfinger along with a collaboration between Pink Floyd's Roger Waters, Van Morrison, and The Band. Add cult faves The Human Beinz, current South Boston punkers Dropkick Murphys, an R&B gem from LaVern Baker, a country- pop selection from the immortal Patsy Cline, and a pair of selections from GrammyÂ® Award-winning score composer Howard Shore and The Departed's soundtrack album promises to be as widely popular as the film.

With Goodfellas, Martin Scorsese completely reinvented the way popular songs--instead of a made-to-measure score--can be used all the way through a movie to emphasize mood and action. He continues in that vein for The Departed, whose soundtrack is full of tunes by classic acts. If a theme emerges, it's great guitar work: on Pink Floyd's "Comfortably Numb," on the Allman Brothers' "One Way Out," on Badfinger's "Baby Blue," and on Roy Buchanan's "Sweet Dreams." (Even the two selections from Howard Shore's score highlight that approach, with performances by Marc Ribot and Larry Saltzman on "The Departed Tango" and by Sharon Isbin on "Beacon Hill.") A couple of numbers also deliver slight twists: the version of Pink Floyd's "Comfortably Numb" is the live one from 1990, when it was performed with Van Morrison and the Band; and the Beach Boys' obscure 1972 song "Sail On, Sailor" isn’t sung by its cowriter Brian Wilson. Thankfully, LaVern Baker and Patsy Cline help offset a very white, very male, very classic-rock selection. While it looks as if Scorsese stopped listening to music sometime around 1975, Beantown's Dropkick Murphys do contribute "I'm Shipping Up to Boston," a nod to the movie's setting. --Elisabeth Vincentelli