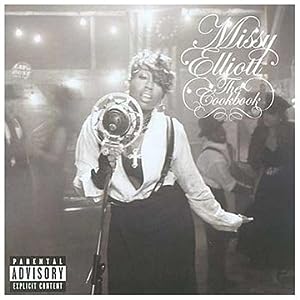 $7.59
As of 2022-12-08 03:03:00 UTC (more info)
Not Available - stock arriving soon
Buy Now from Amazon
Product prices and availability are accurate as of 2022-12-08 03:03:00 UTC and are subject to change. Any price and availability information displayed on http://www.amazon.com/ at the time of purchase will apply to the purchase of this product.
See All Product Reviews

With The Cookbook, the innovative Missy Elliott proves to the masses she is a musical mad scientist whose artistic abilities are unparalleled and without peer. Elliott is a quadruple threat: rapper, singer, songwriter and producer; add that to her woman-empowered lyrics and Missy's ability to be a musical and mental role model is inarguable. As a producer, Missy Elliott knows how to build a great project by incorporating the best talent available, an easy task since so many want to work with her. Not surprisingly, The Cookbook is filled with a world-class guest list. That very large list includes American Idol winner Fantasia , cRunk&B queen Ciara , old-school rapper Slick Rick , dancehall sensation M.I.A. (on the drumline-heavy "Bad Man") and the current queen of soul, Mary J. Blige . In a reversal of roles, "My Struggles" finds Missy singing "Ya'll don't really know my life, y'all don't really know my struggles" while Mary J. raps over a sample of herself from "What's The 411." One unexpected surprise is Missy sings out more than on previous releases. The bare-bones "Remember When" is a definite standout, a 70's-inspired slow jam highlighted by her honest lyrics, sweet falsetto and jazz-affected tones. The beautiful melancholy of "Teary Eyed" is another standout, an amen-inducing testament to a relationship gone wrong and the beginning of the healing process. To hear Missy sing with full rawness and no bravado is a further testament to her talents and will likely bring an even larger audience into her fold. -- Denise Sheppard

only $5.75
Not Available
View Add to Cart