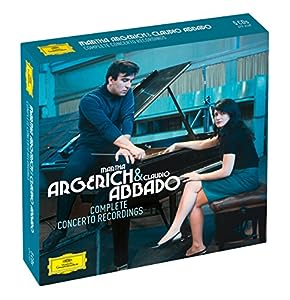 $15.12
As of 2022-11-23 04:01:37 UTC (more info)
Not Available - stock arriving soon
Buy Now from Amazon
Product prices and availability are accurate as of 2022-11-23 04:01:37 UTC and are subject to change. Any price and availability information displayed on http://www.amazon.com/ at the time of purchase will apply to the purchase of this product.
See All Product Reviews

With this special edition DG pays tribute to an extraordinary musical partnership. The 5CD box set collects all the concerto recordings made by pianist Martha Argerich with conductor Claudio Abbado over more than 45 years.
Their final meeting on stage took place at the Lucerne Festival at Easter 2013, where they performed two Mozart concertos. This special occasion was recorded, and the release was not only highly praised but is also Deutsche Grammophon s most successful release of 2014 so far.

Martha Argerich and Claudio Abbado got to know each other through Friedrich Gulda, with whom they both studied in the late 1950s. Their close collaboration in the studio began in 1967 with Argerich s brilliant concerto-debut release of the Prokofiev Third and Ravel G major. Each recording since then has been a success, as much with the critics as on a commercial level.

Then Sing My Soul: The Best of The Pries...

And the Waltz Goes on: Special CD+DVD Ed...

only $9.09
Not Available
View Add to Cart