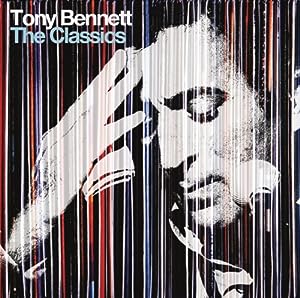 $11.05
As of 2022-09-17 22:47:38 UTC (more info)
Not Available - stock arriving soon
Buy Now from Amazon
Product prices and availability are accurate as of 2022-09-17 22:47:38 UTC and are subject to change. Any price and availability information displayed on http://www.amazon.com/ at the time of purchase will apply to the purchase of this product.
See All Product Reviews

With over a half century of hits to his name and an impressive 17 Grammy Awards, Tony Bennett's career is a "master class" on the popular standard. This new compilation, The Classics, showcases 20 iconic compositions, as only Tony could perform them on his own, or in duet with some of the top musical artists of the recording industry.

Since the release of his first chart-topping single "Because of You" in 1951, Bennett has been captivating audiences with his instantly recognizable voice. The release of his signature song in 1962, "I Left My Heart In San Francisco," made Bennett an instant superstar; since then, he has followed his muse through the 20th century and beyond, breaking the generation gap with brilliant pop albums and acclaimed live performances on stage and television that appeal to fans of all ages.

Now in his seventh decade as a recording artist, Bennett continues to triumph and top the charts, with the release of Duets: An American Classic (2006) and Duets II (2011), all-star albums that found Bennett joining forces with Stevie Wonder, Lady Gaga, Michael Bublé, Amy Winehouse and others. Together, both albums have won six Grammy Awards and were certified platinum by the Recording Industry Association of America. Duets II debuted at #1 on the Billboard Pop Chart making music history to achieve a #1 album at the age of 85.

The Classics features Tony's most beloved recordings, including solo smashes "I Left My Heart in San Francisco," "How Do You Keep the Music Playing" and "When Do the Bells Ring for Me," as well as duets ranging from the likes of Frank Sinatra ("New York, New York") and k.d. lang ("What a Wonderful World") to Lady Gaga ("The Lady Is A Tramp") and Christina Aguilera ("Steppin' Out With My Baby").

Songs of the West, Volume One