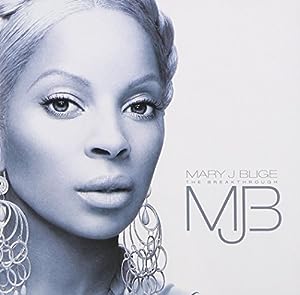 $7.92
As of 2021-07-06 17:48:40 UTC (more info)
Not Available - stock arriving soon
Buy Now from Amazon
Product prices and availability are accurate as of 2021-07-06 17:48:40 UTC and are subject to change. Any price and availability information displayed on http://www.amazon.com/ at the time of purchase will apply to the purchase of this product.
See All Product Reviews

Nobody knows heartache like Mary J. knows heartache. But as she releases her seventh disc, perhaps more important is that nobody understands better how unquenchable our thirst to hear what it sounds like can be. The Breakthrough, contrary to run-up rumors, is no retrospective or greatest-hits package. Rather than reheat, Blige and producers Dr. Dre, Jimmy Jam, Terry Lewis, and Will.i.am tasked themselves with stirring a river of hurt into some of the highest-caliber hip-hop/soul to hit the airwaves since she burned up the Waiting to Exhale soundtrack with "Not Gon' Cry." Cameos alone could sell this disc: Brook, Jay-Z, Raphael Saadiq, and Bono step up. But it's the trademark ragged-edged soul of its star that shines brightest throughout the 16 tracks. "A love that tears you down ain't really love," a laid-bare Blige reminds us on "Ain't Really Love," after dedicating "Good Woman Down" to "my troubled sisters." Somewhere in between, she leaves absolutely no room for doubt that she just can't be without her baby ("Be Without You"). It's an exhilarating, love-affirming moment on a CD jammed full of them (check out "Can't Get Enough," with its echoes of a pleading Curtis Mayfield). Blige, never far from the thoughts of the lovelorn, didn't need a breakthrough, but anybody with an ear for artful confession will be glad she's given us The Breakthrough anyway. --Tammy La Gorce

REMIND ME: The Classic Elektra Recording...