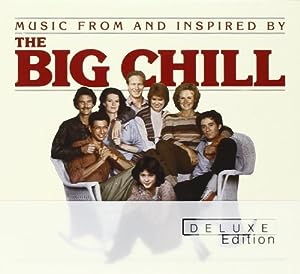 $23.28
As of 2022-11-26 21:18:12 UTC (more info)
Not Available - stock arriving soon
Buy Now from Amazon
Product prices and availability are accurate as of 2022-11-26 21:18:12 UTC and are subject to change. Any price and availability information displayed on http://www.amazon.com/ at the time of purchase will apply to the purchase of this product.
See All Product Reviews

This movie made Motown hot again and spawned two best-selling soundtrack albums, both of which you'll find on disc one. Disc two, meanwhile, adds another 19 tracks of classic '60s rock and soul for the ultimate baby-boom flashback! Includes I Heard It Through the Grapevine Marvin Gaye; Good Lovin' Rascals; Tell Him Exciters; When a Man Loves a Woman Percy Sledge; My Girl Temptations; We Ain't Got Nothin' Yet Blues Magoos; What Becomes of the Brokenhearted Jimmy Ruffin, and more. 38 classic tunes!

Writer/director Lawrence Kasdan's The Big Chill was one of Hollywood's first forays into baby-boomer navel-gazing, an examination of 60's idealism gone sour during the subsequent selfish excesses of the Me Decade and Go-Go 80's. It's Motown classics-dominated score became both a commercial sensation and generational touchstone, facets that often overlooked its status as one of the most artistically skillful pop song scores ever set to a film. This deluxe two CD edition won't defuse any of the often overweening nostalgia that's been its hallmark. Indeed, this slip-cased, expanded set (which includes the 1983 album's complete original track listing, as well as that of its 1984 sequel, More Songs From the Big Chill) often seems to relish in them on the new classic-rock dominated second disc, Bigger Chill: Music of a Generation. The second disc's tracks (which span more Motown, and a gamut from James Brown to Lesley Gore) are "inspired" by the film and not in it, but should more than please those enthralled by the original collection. Also included are previously unavailable instrumental versions of the Stones' "You Can't Always Get What You Want," Bert Kaempfert's "Strangers in the Night" and the mock TV "J.T. Lancer" theme, tracks that were the film's only "traditional" scoring touches. --Jerry McCulley

This Is Water: The Original David Foster...

Songs That Got Us Through WWII from Rhin...