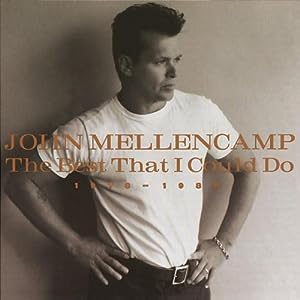 $5.99
As of 2023-01-31 18:25:21 UTC (more info)
Not Available - stock arriving soon
Buy Now from Amazon
Product prices and availability are accurate as of 2023-01-31 18:25:21 UTC and are subject to change. Any price and availability information displayed on http://www.amazon.com/ at the time of purchase will apply to the purchase of this product.
See All Product Reviews

This first-ever Mellencamp retrospective contains his first hit, 1979's I Need a Lover ; his huge singles Jack and Diane; Hurts So Good; R.O.C.K. in the U.S.A.; Pink Houses , and more, plus a brand-new song, Without Expression . 16 tracks in all.

The Best That I Could Do collects the singles that led John Mellencamp into the radio/jukebox pantheon he celebrated in "R.O.C.K. in the U.S.A." and "Cherry Bomb." While albums such as American Fool, Uh Huh, and Scarecrow held Top 10 spots for months, their spinoff hits made this Hoosier disciple of Jagger, J.B., and Iggy into something like a Reagan-era John Fogerty: not only were "Pink Houses," "Paper in Fire," and "Crumblin' Down" wise (and wiseacre) dispatches from an America where it wasn't always morning, they could fill a dance floor and get you pounding the dashboard on the way home. --Rickey Wright