The Best of the Three Tenors from Decca 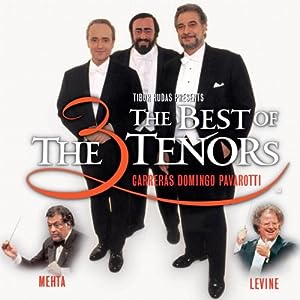 The Best of the Three Tenors from Decca

$9.86
As of 2022-01-10 17:58:44 UTC (more info)
Not Available - stock arriving soon
Buy Now from Amazon
Product prices and availability are accurate as of 2022-01-10 17:58:44 UTC and are subject to change. Any price and availability information displayed on http://www.amazon.com/ at the time of purchase will apply to the purchase of this product.
See All Product Reviews

Description of The Best of the Three Tenors from Decca

Top40 Music Store are happy to stock the excellent The Best of the Three Tenors.

With so many available right now, it is great to have a make you can recognise. The The Best of the Three Tenors is certainly that and will be a superb acquisition.

For this reduced price, the The Best of the Three Tenors is widely recommended and is a popular choice with lots of people. Decca have provided some nice touches and this results in good value.

Back in 1990, three of the world's most celebrated tenors--namely, José Carreras, Plácido Domingo, and Luciano Pavarotti--combined forces to create the Three Tenors, now celebrated on a best-of CD. They gave their first concert in Rome. The event was recorded and went on to become one of the best-selling classical titles of all time.

This latest release brings together tracks from that night in Rome (including "Nessun dorma" and a competitive rendition of "O sole mio") with music performed in a 1994 concert in Los Angeles and at the 1998 event in Paris where the Three Tenors sang to an audience of thousands with the Eiffel Tower as their backdrop.

The 22 tracks making up The Best of the Three Tenors range from operatic standards, such as the joyful "Brindisi" from La Traviata, to popular songs like "Singin' in the Rain" and "You'll Never Walk Alone" (from Carousel). There are no solos on this disc; each piece is performed by all three singers. And with plenty of applause and cheering to be heard, not to mention the sense of fun in the singers' voices, the disc captures the atmosphere of these extraordinary musical events. --Rebecca Agnew

CARRERAS / DOMINGO / PAVAROTTI THE BEST OF THE 3 TENORS