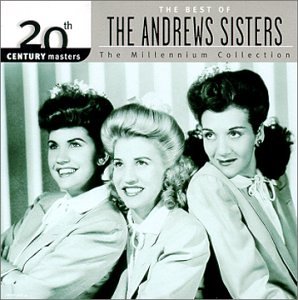 $6.78
As of 2022-12-03 09:44:23 UTC (more info)
Not Available - stock arriving soon
Buy Now from Amazon
Product prices and availability are accurate as of 2022-12-03 09:44:23 UTC and are subject to change. Any price and availability information displayed on http://www.amazon.com/ at the time of purchase will apply to the purchase of this product.
See All Product Reviews

Take all the biggest hits that Patty, Maxene and LaVerne scored from the '30s to the '50s, cram 'em into one CD, and you've got this! Includes Bei Mir Bist du Schon; Boogie Woogie Bugle Boy; Shoo Shoo Baby; Rum and Coca-Cola; I Wanna Be Loved; Ac-Cent-Tchu-Ate the Positive; Near You; I Can Dream, Can't I? , and more.

The oft-touted critical notion that pop music revivals are usually spawned by reactionary nostalgia founders miserably when trying to explain swing music's resurgence, a renaissance seen over by latter-day hipsters born three decades after the music's supposed demise. A better explanation can be found on this 12-track Andrews Sisters sampler: vibrant, sassy music that's influenced artists from Bette Midler to the Manhattan Transfer and beyond. Starting as purveyors of typically serene ballads in the late '30s, the Andrews' tight harmonies virtually became the nation's soundtrack during the war years when wed to swing (the era-defining "Boogie Woogie Bugle Boy") and even influences as seemingly far afield as blues ("Shoo-Shoo Baby") and calypso ("Rum and Coca-Cola"). Culled mostly from their stellar '40s prime, this collection serves as a great introduction to a stellar career--and a fine rationale for swing's unexpected modern blossoming. --Jerry McCulley