The Bad Plus Joshua Redman 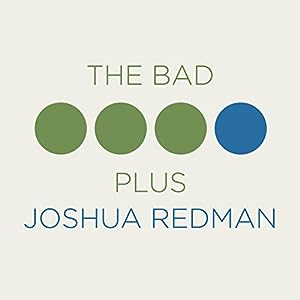 The Bad Plus Joshua Redman

$10.25
As of 2021-07-28 03:13:13 UTC (more info)
Not Available - stock arriving soon
Buy Now from Amazon
Product prices and availability are accurate as of 2021-07-28 03:13:13 UTC and are subject to change. Any price and availability information displayed on http://www.amazon.com/ at the time of purchase will apply to the purchase of this product.
See All Product Reviews

"The Bad Plus (plus one) roared as if a quartet were always lying just beneath its surface." —Los Angeles Times

In 2011, The Bad Plus invited saxophonist Joshua Redman to join them for a week of enthusiastically received performances at the Blue Note in New York City. They then played a handful of dates before heading into the studio in 2014 to record their debut album, The Bad Plus Joshua Redman, which Nonesuch releases on May 26, 2015. Seven of the nine tracks on The Bad Plus Joshua Redman are new compositions by the quartet members who, in addition to Reid Anderson and Redman, include The Bad Plus pianist Ethan Iverson and drummer David King. The other two songs on the album, "Dirty Blonde" and "Silence Is the Question," are new arrangements of Bad Plus favorites.

Of a recent show in Great Barrington, MA, Albany’sMetrolandsaid, "The newly christened Bad Plus Joshua Redman took the stage … and proceeded to raise the roof. In a word, the music the quartet produces is sublime. More than that, it's as though Redman is the long-lost fourth member of the group, just waiting to be snapped snugly into place."

"On the live gigs, Josh plays magnificent, long tenor solos which are very much in the jazz tradition," said Iverson. "That’s obviously not the focus when we play as The Bad Plus. It’s fun to for us to enjoy that extended blowing territory, especially with someone as great as Josh. On the album, however, there is still a focus on composition."

Anderson told Minneapolis’ Star Tribune: "Josh is a professional of the highest order. He came in knowing our music to the point of memorizing it, with great, positive energy."

Redman adds, "Playing with The Bad Plus has allowed me to explore a part of my playing, and my musical heritage, that I’ve never before accessed in quite the same way with any other group. The adventure with The Bad Plus pushes me toward the fringes and draws me into the core."

The Jazzmasters VII from TRIPPIN & R...