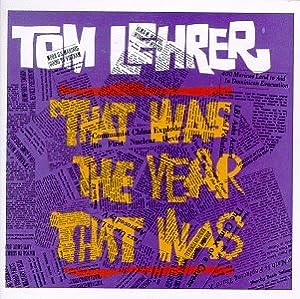 $41.00
As of 2022-12-07 16:47:16 UTC (more info)
Not Available - stock arriving soon
Buy Now from Amazon
Product prices and availability are accurate as of 2022-12-07 16:47:16 UTC and are subject to change. Any price and availability information displayed on http://www.amazon.com/ at the time of purchase will apply to the purchase of this product.
See All Product Reviews

Harvard-educated mathematician by trade and sociopolitical humorist and satirist by avocation, ivory tickler Tom Lehrer sang irreverent ditties that both outraged and delighted listeners during his on-again, off-again heyday of public performance in the late 1950s through the 1970s. Perhaps best known for his "Poisoning Pigeons in the Park," Lehrer combined razor-sharp wit with dry delivery inspired by everything from vaudeville and ragtime to whimsical show tunes and faux folk. Though a tad dated, Lehrer's wickedly pointed That Was the Year That Was is as good a representation of the mid-'60s American social and political climate as any. Recorded live in 1965 and composed largely of songs from the contemporaneous NBC series That Was the Week That Was, the album takes on boho Americana ("The Folk Song Army"), censorship ("Smut"), and the atomic bomb ("Who's Next"). Devilishly funny as well are the outstanding "Vatican Rag" and the puzzle that is "New Math." --Paige La Grone

Last Of The Jewish Cowboys: The Best Of ...

only $9.71
Not Available
View Add to Cart