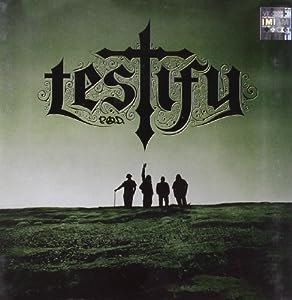 $7.99
As of 2023-01-29 03:07:59 UTC (more info)
Not Available - stock arriving soon
Buy Now from Amazon
Product prices and availability are accurate as of 2023-01-29 03:07:59 UTC and are subject to change. Any price and availability information displayed on http://www.amazon.com/ at the time of purchase will apply to the purchase of this product.
See All Product Reviews

Description of Testify by Atlantic

We are delighted to present the fantastic Testify.

With so many available today, it is good to have a name you can recognise. The Testify is certainly that and will be a superb purchase.

For this price, the Testify is widely respected and is always a regular choice for lots of people. Atlantic have added some great touches and this results in good value.

Since their release of their first Atlantic album just six years ago, P.O.D. has earned global acclaim and multi-platinum sales for their trademark brand of uplifting power rock. The aptly titled Testify displays the band at their fiery best. Longtime followers of P.O.D.-aka "the Warriors"-will rejoice in many of the band's trademark sonics, from the full-on energy of 'This Time' to the "Boom"-esque refrain of the ferocious 'Lights Out' and 'Say Hello' to the ulitmately inspiring message of the poignant first single, 'Goodbye for Now'. Atlantic. 2006.

Five albums into its career P.O.D. stands at a critical juncture. The youthful nation that made this band of California Christians into what it is today has grown older and its tastes have grown more refined, meaning that P.O.D. may have to follow suite. Testify's first act suggests that the band has moved in that direction--there's enough heaviness throughout to please those who've joined the P.O.D. posse within the last two years while the group's appreciation for both hip-hop and reggae--deepens. Hasidic MC Matisyahu guests on two tracks ("Roots In Stereo," "Strength Of My Life"), while "Sounds Like War" and "On The Grind" are noble attempts at attracting more diverse audiences. Although the material remains accessible throughout, both the listener and band both grow weary just after the album's halfway point; the final tracks prove largely indistinguishable from each other, even when tempos and attitudes appear to shift. Testify will please the faithful but despite its best intentions P.O.D. may have some trouble finding new converts.--Jedd Beaudoin