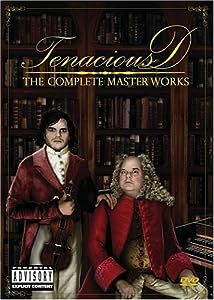 $13.98
As of 2021-06-13 13:12:52 UTC (more info)
Not Available - stock arriving soon
Buy Now from Amazon
Product prices and availability are accurate as of 2021-06-13 13:12:52 UTC and are subject to change. Any price and availability information displayed on http://www.amazon.com/ at the time of purchase will apply to the purchase of this product.
See All Product Reviews

With pitchfork and shovel, Tenacious D has labored to finally unearth the first ever Tenacious D-VD from the fragrant bowels of Hades. For years, this turd has been spit-polished, massaged, and finally sanctified by both Jables and KG, and they are now ready release it to the world.

This highly provocative DVD contains the legendary and epic recital at London's Brixton Academy that was by chance recorded on November 3, 2002. Watch as Jack and Kyle slay the mighty dragon and treat the British public to a phenomenal performance that includes the now classic D melodies; Wonderboy, Explosivo, Kyle Quit The Band, Friendship, Kielbasa, Dio, The Cosmic Shame, F#*! Her Gently, Tribute and the ever popular Live Short Films that have been screened during The D's shows.

The Complete Masterworks also contains the groundbreaking, hard to get (legally), HBO episodes which tell the tale of The D in their early days on the road to stardom.

But that's not all! Act now and a bonus second disc will be gifted to the first twelve million loyal Tenacious D apostles, included is an intimate portrait of Jack and Kyle and their life of carnal debauchery on the road. Lucky owners of the DVD will catch rare and gruesome behind the scenes glimpses of the making of the Tribute & Wonderboy videos as well as never before seen footage of The D as they perform their secret backstage rituals. TENACIOUS D: THE COMPLETE MASTERWORKS is truly a harbinger of the good times ahead as we all await the coming apocalypse.

If you're not a Tenacious D fan already, The Complete Master Works might make you an instant convert (or scare you away; it all depends). One thing's for sure: If you thought "the D" were nothing more than a novelty act, this two-disc feast will set you straight, proving that classically trained guitarist Kyle Gass and fast-rising comedy star Jack Black (School of Rock) are a bona fide acoustic power duo, scorching the pop-cultural landscape with their satirically scathing lyrics while qualifying as legitimate musicians with awesome chops and just enough insanity to make them dangerous on stage. Disc 1 ("For Fans") is all meat and potatoes, consisting of a brilliant concert (taped at London's Brixton Academy, November 3, 2002) in which Black casts himself as an abrasive provocateur, daring to offend "KG" and the audience alike with barbed taunts and spiteful attitude (all faked, of course, but convincing enough to sucker the gullible). The musicianship is first-rate, and Black's vocals remarkably spry, a deft combination of rapid-fire scatting and heavy-metal worship. The HBO episodes chronicle TD's early years as their popularity was still mostly an L.A.-based phenomenon, and without exception they're wet-your-pants hilarious.

Disc 2 is aptly dubbed "For Psycho Fans," offering a potpourri of TD ephemera for true devotees, including three HBO short films that are gross enough (and funny enough) to make any Farrelly Brothers comedy look positively tame by comparison (in other words, this definitely isn't kid's stuff). The TV appearances are somewhat redundant with the concert material, and the "On the Road" video diaries are perfunctory but fun. The best is saved for last: two music videos paired with "making-of" featurettes, including Spike Jonze's fantasy-oriented video for "Wonderboy," and a devilishly adult-oriented video for "FHG" (salacious "D" fans know what that means) from the animators of Ren & Stimpy. If you're offended, don't blame "Kage" and "Jables"--their Tenacious DVD has "Parental Advisory" clearly stamped on its cover, and prudes are well-advised to stay away. --Jeff Shannon

Life Is Worth Losing

True Stories I Made Up