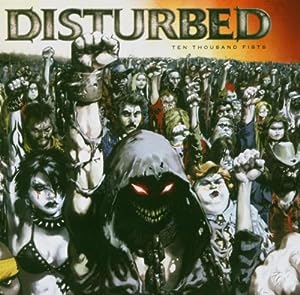 $5.12
As of 2023-01-31 09:38:48 UTC (more info)
Not Available - stock arriving soon
Buy Now from Amazon
Product prices and availability are accurate as of 2023-01-31 09:38:48 UTC and are subject to change. Any price and availability information displayed on http://www.amazon.com/ at the time of purchase will apply to the purchase of this product.
See All Product Reviews

With so many available recently, it is great to have a make you can trust. The Ten Thousand Fists is certainly that and will be a perfect purchase.

For this price, the Ten Thousand Fists is highly recommended and is always a regular choice for lots of people. Reprise / Wea have added some nice touches and this means great value for money.

After a triple-platinum debut and platinum follow-up, Disturbed fuses the brutality and darkness of 2000's The Sickness with the added melodic nature and complexity of 2002's Believe for album number three. Aggressive, relentless and intense-yet at the same time transcendent-Ten Thousand Fists is a rock sledgehammer.

On their third album, Disturbed don't as much break out of expected patterns as show their potential for doing so. Fans eager for more of the band's patented fist-thumping gruel will take satisfaction in the album's opening (and anthemic) title track, plus "I'm Alive" and "Forgiven." The band shines brightest in the record's early moments, where "Deify," "Guarded," "Just Stop," and "Stricken" demonstrate that this unit's capable of discovering a song's subtleties and crafting radio-ready choruses meant to uplift the souls of disenfranchised subdivision dwellers. The album isn't without its problems––come the halfway mark ("Sons of Plunder") vocalist David Draiman and his mates lapse into the expected, with a series of songs that are good but rarely as remarkable as those found in Act I. That said, Ten Thousand Fists ultimately reminds us that Disturbed refuse to relent in their journey toward greatness. --Jedd Beaudoin

Sailing The Seas Of Cheese [LP]