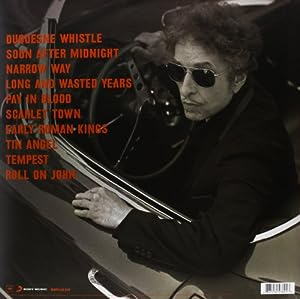 $23.14
As of 2021-06-17 14:24:01 UTC (more info)
Not Available - stock arriving soon
Buy Now from Amazon
Product prices and availability are accurate as of 2021-06-17 14:24:01 UTC and are subject to change. Any price and availability information displayed on http://www.amazon.com/ at the time of purchase will apply to the purchase of this product.
See All Product Reviews

Tempest is Bob Dylan's highly-anticipated 35th studio album and coincides with the 50th anniversary of his 1962 eponymous debut album. Produced by Jack Frost and recorded with the members of Dylan's touring band and Los Lobos' David Hidalgo, Tempest has received worldwide critical acclaim and has been firmly anchored at the top of Amazon s Best Sellers in Music chart since it became available for pre-orders in July 2012.

Entertainment Weekly gives it a ''Grade: A'' and writes, ''Dylan remains as magical and mysterious as ever.'' Associated Press calls it , ''One of the best discs you ll hear by anyone this year.'' Mojo also gives the album five stars, writing, ''Dylan sets sail on his finest album of this century.''

New Yorker says Tempest is ''as spirited and vigorous an album as he's made.'' The Washington Post writes that Dylan ''has delivered his most compelling release in more than a decade.''

Bob Dylan's four previous studio albums have been universally hailed as among the best of his storied career, achieving new levels of commercial success and critical acclaim for the artist. This year, Bob Dylan was also the recipient of the Presidential Medal of Freedom, the country's highest civilian honor.

The vinyl edition of this album is pressed on two 180 gram audiophile quality records by Furnace MFG. The LP also includes a CD copy of the entire album.

Stand Back: The Anthology

Stand Up (The Elevated Edition)(2CD/DVD)