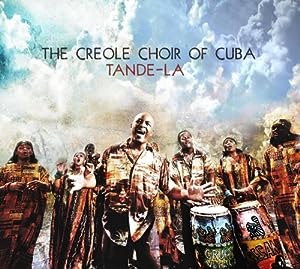 $7.95
As of 2021-10-15 05:25:57 UTC (more info)
Not Available - stock arriving soon
Buy Now from Amazon
Product prices and availability are accurate as of 2021-10-15 05:25:57 UTC and are subject to change. Any price and availability information displayed on http://www.amazon.com/ at the time of purchase will apply to the purchase of this product.
See All Product Reviews

The Creole Choir of Cuba are called 'Desandann' in their home country which means 'descendants' and with the songs on their forthcoming album 'Tande-La' (a title which translates as 'listen') they tell the stories of their Haitian ancestors who were brought to Cuba to work in near slave conditions on the sugar and coffee plantations.

The Choir - five men and five women - hail from beautiful Camagüey, Cuba's third city, an old colonial town, designated a UNESCO World heritage Site in 2008 for its iconic architecture. They have studied music to university level in Camagüey and are all members of the Provincial Choir, which their leader Emilia directs. Desandann emerged out of this choir in 1994, a difficult time for Cubans when the economy fell into a black hole following the end of the USSR and of Soviet support for the revolution. Food was short while homes and work places often went dark due to lack of electricity.

The singers decided to re-forge the resistance songs and laments of their forebears, to celebrate the history of their Haitian descendents enslaved to the Caribbean from West Africa. To the songs that had been passed down in their families since the early 19th century, they added more modern Haitian sounds. With irresistible melodies driven by richly textured harmonies, shifting Caribbean rhythms with a very original root bass sound, this is impassioned singing by a unique group celebrating roots, resistance and the irresistible rhythms of life. In the words of the glorious 'Edem Chanté' - Help Us Sing!

Everybody Loves The Sunshine