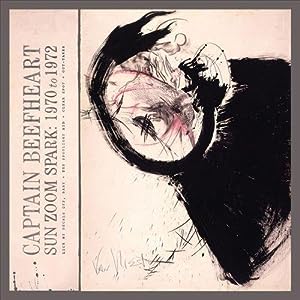 $74.65
As of 2021-07-24 22:14:03 UTC (more info)
Not Available - stock arriving soon
Buy Now from Amazon
Product prices and availability are accurate as of 2021-07-24 22:14:03 UTC and are subject to change. Any price and availability information displayed on http://www.amazon.com/ at the time of purchase will apply to the purchase of this product.
See All Product Reviews

Rhino intends to change that with a limited edition four-LP collection that revisits the albums Captain Beefheart (aka Don Van Vliet) recorded with the Magic Band in the early Seventies. It includes all three albums, which have been remastered for the first time, as well as an entire disc featuring 14 previously unissued outtakes from that era.
Recorded over a couple of weeks in the summer of 1970 at United Recording Group in Hollywood, Lick My Decals Off, Baby was released the following October. One of Van Vliet's favorites, the album represents the apex of his dissonant style and includes such standout tracks as the quirky-funny "I Love You, You Big Dummy" and the exquisite solo guitar piece "One Red Rose That I Mean."

It was followed by The Spotlight Kid, which was recorded at The Record Plant in Los Angeles during the summer of 1971. It features a more barebones, blues-rock sound on songs like "Click Clack," "I'm Gonna Booglarize You Baby" and "Alice In Blunderland." Lester Bangs wrote in Rolling Stone (March '72) that Beefheart had struck the balance between "intensely personal type of statement" and "mass appeal," praising the album for its "wit and genius."

Soon after, Clear Spot was released. Recorded in the summer of 1972, the album introduced several standout tracks, such as the vulnerable love song "My Head Is My Only House Unless It Rains," the soul ballad "Too Much Time," and the pulsing "Big Eyed Beans from Venus."

The fourth and final LP in SUN ZOOM SPARK includes unreleased tracks and is a trove of alternate versions, rehearsals and outtakes from the sessions for The Spotlight Kid and Clear Spot. The LP reveals just how much some songs evolved before being released. Among the highlights are a sung-version of "I Can't Do This Unless I Can Do This/Seam Crooked Sam," which became a spoken-word performance on Bat Chain Puller ; a raucous, off-kilter version of "Dirty Blue Gene" that pointed the way to the final version on Doc at the Radar Station; and an instrumental rehearsal of "The Witch Doctor Life" that is nearly unrecognizable compared to the version heard on 1982's Ice Cream For Crow.

Fly on the Wall

only $3.47
Not Available
View Add to Cart