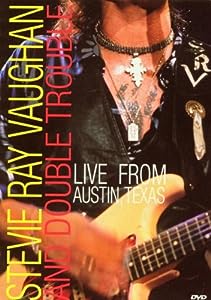 $11.98
As of 2022-10-01 14:39:05 UTC (more info)
Not Available - stock arriving soon
Buy Now from Amazon
Product prices and availability are accurate as of 2022-10-01 14:39:05 UTC and are subject to change. Any price and availability information displayed on http://www.amazon.com/ at the time of purchase will apply to the purchase of this product.
See All Product Reviews

Like so many living legends and phenomenal talents, Stevie Ray died in a helicopter crash in 1991. Luckily, there are scores of recordings documenting the genius of this Texan blues guitarist, including these appearances on Austin City Limits and more. 1983-89/color/63 min/NR/fullscreen.

Few guitarists ever mastered the Fender Stratocaster like the late, great Texas bluesman Stevie Ray Vaughan, and this priceless digital video disc collects both of the sizzling appearances that Vaughan and his solid band, Double Trouble, made on the PBS concert series Austin City Limits. Combined to form the most popular program in the show's distinguished history, the concerts were taped in 1983 and 1989; both provide a valuable portrait of Vaughan's astounding artistic development. The performances serve as bookends to Vaughan's brilliant career with Double Trouble, showing (in the words of producer Terry Lickona) a striking contrast between "zero self-confidence" and "pure magic," but in both cases you can see a master at work. Songs include "Pride and Joy," "Texas Flood," "Voodoo Chile," "Cold Shot," and "Riviera Paradise." This great-sounding DVD also includes the posthumous music video "Little Wing," featuring clips of Double Trouble and archival footage of blues greats from the 1920s to the mid-1990s. If you're even a part-time blues fan, Stevie Ray Vaughan: Live from Austin, Texas is a must-have disc. --Jeff Shannon

Love Is an Army

only $7.30
Not Available
View Add to Cart