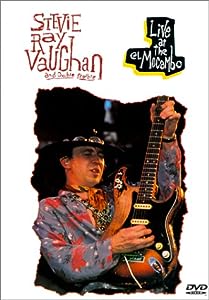 $11.98
As of 2023-02-03 02:26:08 UTC (more info)
Not Available - stock arriving soon
Buy Now from Amazon
Product prices and availability are accurate as of 2023-02-03 02:26:08 UTC and are subject to change. Any price and availability information displayed on http://www.amazon.com/ at the time of purchase will apply to the purchase of this product.
See All Product Reviews

We are happy to offer the excellent Stevie Ray Vaughan & Double Trouble - Live at the El Mocambo 1983.

With so many available today, it is wise to have a brand you can recognise. The Stevie Ray Vaughan & Double Trouble - Live at the El Mocambo 1983 is certainly that and will be a great acquisition.

For this great price, the Stevie Ray Vaughan & Double Trouble - Live at the El Mocambo 1983 comes widely recommended and is always a regular choice for most people. Sony have provided some excellent touches and this equals great value for money.

In 1990, Texas bluesman Stevie Ray Vaughan was just emerging from a long period in which drugs had taken their toll: the previous year's In Step album was the first he had made drug free, and the results were a marvel. But then, after sharing a stage with Buddy Guy, Robert Cray, and Eric Clapton, he boarded a helicopter to Chicago. It crashed, and the career of one of the great blues guitarists was ended.

Rewind to 1983 and here is Stevie Ray at the beginning of his fame, his first album with his backing band Double Trouble, Texas Flood, having just been released to critical and popular acclaim. The venue is the El Mocambo club in Toronto, a dark, smoky joint with a laid-back but appreciative clientele. Vaughan, drummer Chris Layton, and bassist Tommy Shannon share the tiny stage. The guitarist, bedecked in trademark hat and alligator-skin boots, is pale of complexion, sweating from the heat and physical exertion, and physically much smaller than Shannon, who towers over him. But Vaughan dominates, as much by the magnetism of his flamboyant personality as his guitar playing. And what playing: by turns fiery, funky, then limpid and surprisingly graceful. Here is an authentic blues artist captured in the throes of living through his music. At this early stage in his career he was still very much in thrall to Jimi Hendrix (the flower-power shirt gives it away), as covers of "Voodoo Chile" and "Third Stone from the Sun" (the latter a Hendrix-inspired guitar-abuse session) indicate. The highlight of the show, however, is his rendition of "Texas Flood," which turns out to be an amazing essay on the art of blues guitar. This is a raw, intimate, and spontaneous record of a one-time event. All fans of the blues will be grateful to those who had the foresight to capture it on film. --Mark Walker

In The Right Place *Created for WMI Comp...