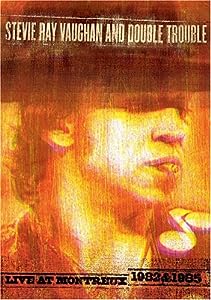 $13.98
As of 2021-10-19 03:56:16 UTC (more info)
Not Available - stock arriving soon
Buy Now from Amazon
Product prices and availability are accurate as of 2021-10-19 03:56:16 UTC and are subject to change. Any price and availability information displayed on http://www.amazon.com/ at the time of purchase will apply to the purchase of this product.
See All Product Reviews

By the summer of 1982, Stevie Ray Vaughan, desparately searching for his big break, was asked to play "Blues Night" at the annual Montreux Jazz Festival in Montreux, Switzerland. Stevie put on a fiery performance - full of future SRV classics like "Pride

If you have even a passing interest in Stevie Ray Vaughan's peerless mastery of urban blues guitar, you must own Live at Montreux 1982 & 1985. Spaced almost exactly three years apart, these concerts (60 and 93 minutes, respectively) represent the Texan blues god at his fiery best, with Double Trouble (drummer Chris Layton and bassist Tommy Shannon) laying the solid foundation upon which SRV built a Fender-driven sound as fierce as it was perfectly refined. The '82 show was truly "success in disguise," because despite booing from a festival audience lulled by a day of acoustic blues, and the stunned dejection that SRV felt after persevering through a uncompromising set, this was the turning point in SRV's career, leading to post-show encounters with Jackson Browne and David Bowie, who proved instrumental in bringing Stevie's music to an appreciative global audience.

When Stevie, Chris, and Tommy returned to Switzerland three years later, with organist Reese Wynans adding rich new dimension to the Double Trouble sound, the Montreux crowd was primed for a rip-snorting set, and SRV's jubilant response is a joyous thing to witness. One of SRV's favorite bluesmen, Johnny Copeland, appears for a three-song triumph in a set that's uniformly superior and ecstatically energized. Basic three-camera coverage is all you need, although guitar students--for whom this DVD is a godsend--will surely wish for more emphasis on SRV's picking and fretwork. Recording quality is superb in the Montreux tradition, with 5.1-channel remixes that surpass the original masters. A splendid 23-minute documentary features retrospective interviews with Layton, Shannon, Browne, and John Mayer, and the accompanying booklet includes a heartfelt reminiscence from Bowie. Stevie Ray may be gone, but Live at Montreux ensures that his gold-standard legacy will endure. --Jeff Shannon

By the summer of 1982, Stevie Ray Vaughn was already a veteran of the Southern blues circuit. Desperately searching for his big break, he was asked to play "Blues Night" at the annual Montreaux Jazz Festival in Montreaux, Switzerland. Playing like his life depended on it, Stevie put on a fiery performance - full of future SRVics like "Pride and Joy" and "Love Struck Baby." The audience could have

Songs From the Road