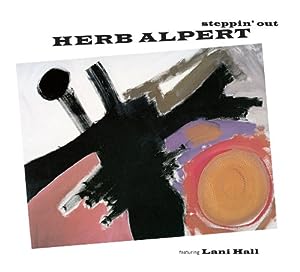 $29.87
As of 2022-09-24 17:47:38 UTC (more info)
Not Available - stock arriving soon
Buy Now from Amazon
Product prices and availability are accurate as of 2022-09-24 17:47:38 UTC and are subject to change. Any price and availability information displayed on http://www.amazon.com/ at the time of purchase will apply to the purchase of this product.
See All Product Reviews

Grammy®-winning jazz great Herb Alpert is Steppin' Out with a new album that combines pop instrumentals and timeless jazz along with Latin-influenced rhythms reminiscent of the Tijuana Brass. Steppin' Out explores standards from the American Songbook as well as Alpert's own catalog, and features his wife, the Grammy®-winning vocalist Lani Hall, on several tracks. Highlights include the single "Puttin' on the Ritz," Art Pepper's "Our Song," Astor Piazolla's "Oblivion," and a trio of Tijuana Brass chestnuts, "Good Morning Mr. Sunshine," "And the Angels Sing," and the 50th Anniversary recording of "The Lonely Bull."

Alpert is one of the founders of A&M Records the most successful independent record label of all time, where he recorded as a solo artist and leader of the Tijuana Brass, selling over 75 million records. Overall, Alpert has scored five #1 Billboard Pop Singles, and won eight GRAMMY's, and received, with his partner, Jerry Moss the GRAMMY Lifetime Achievement Award and The Rock & Roll Hall of Fame Lifetime Achievement Award. In President Obama presented to him a National Medal of Arts Award. In 2013 President Obama awarded him the National Medal of Arts, the highest award given to artists and arts patrons by the United States government.