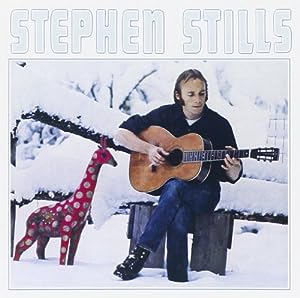 $5.48
As of 2022-12-04 09:29:40 UTC (more info)
Not Available - stock arriving soon
Buy Now from Amazon
Product prices and availability are accurate as of 2022-12-04 09:29:40 UTC and are subject to change. Any price and availability information displayed on http://www.amazon.com/ at the time of purchase will apply to the purchase of this product.
See All Product Reviews

His first (1970) solo record, with Crosby, Nash, Clapton and Hendrix on board! Includes Love the One You're With; Sit Yourself Down , and more.

He wasn't the most accomplished member of Crosby, Stills, Nash & Young--or even of Crosby, Stills &Nash, for that matter. But his songs are certainly in a league with those of the other members, and it's chiefly on his solo albums that Stills's own personality comes through. Buffalo Springfield's "For What It's Worth" belongs to Stills, which shows where his influences lie. The hits "Love the One You're With" and "Sit Yourself Down," both of which live here, show how they developed. Sensitive? Lyrical? Not exactly. Think rugged denim, an acoustic guitar, and a woman at home to sew on his appliqués and pick the seeds out of the pot. --Gavin McNett

Goin Back To Orleans