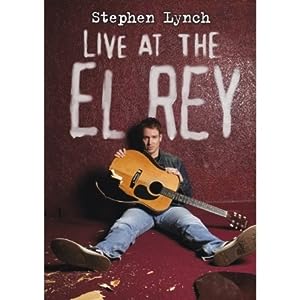 $14.98
As of 2021-04-13 20:11:13 UTC (more info)
Not Available - stock arriving soon
Buy Now from Amazon
Product prices and availability are accurate as of 2021-04-13 20:11:13 UTC and are subject to change. Any price and availability information displayed on http://www.amazon.com/ at the time of purchase will apply to the purchase of this product.
See All Product Reviews

This DVD captures the unique singer-comedian in his natural environment: on stage. Included is a happily twisted routine of perversely hilarious songs. This DVD features prevously unreleased songs. The DVD carries a Parental Advisory.

Comedian Stephen Lynch brings his guitar, choirboy-sweet voice, and sardonic (often bawdy) songs before an appreciative audience in the wacky Stephen Lynch: Live at the El Rey. Setting the tone with "Not Home," in which Lynch testifies to the glories of pleasuring himself with his lover's undergarments, the comic digs an ever-deeper hole (in a good way, of course) with an ode to ugly newborns in "Baby," cheerfully recalls sexual abuse at the hands of a priest in "Priest," and caps the delicate "Love Song" with the blunt admission, "I have herpes." A ditty called "Superhero" makes a great centerpiece, in which Lynch sounds like a pre-school teacher invoking the marvels of such make-believe characters as "Awesome Man" and "Immigration Dude." (Lynch also does his impression of a bong during the bit.) Fellow funnyman Mark Teich joins Lynch on several tunes, including "D&D," an anthem to the geek universe of Dungeons and Dragons. --Tom Keogh

Do You Believe in Gosh?