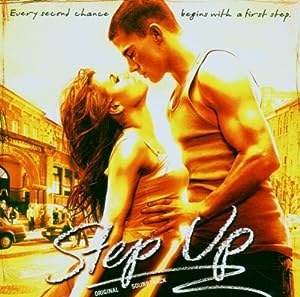 $4.17
As of 2021-06-02 04:38:07 UTC (more info)
Not Available - stock arriving soon
Buy Now from Amazon
Product prices and availability are accurate as of 2021-06-02 04:38:07 UTC and are subject to change. Any price and availability information displayed on http://www.amazon.com/ at the time of purchase will apply to the purchase of this product.
See All Product Reviews

Get ready to dance with this hot new soundtrack featuring the hit single "Get Up" by Ciara feat. Charmillionaire and "Say Goodbye" by Chris Brown. It will be sure to make you get off your seat.

While Disney has successfully cornered the market for younger teens with its Disney Channel musicals, Step Up shows the company (through its Buena Vista subsidiary) addressing the older high-school set with equal flair. Directed and choreographed by Anne Fletcher (choreographer of the excellent Bring It On), the musical depicts a clash between kids representing "street" and more formal dance, though its soundtrack is resolutely turned toward the R&B/hip-hop/dancehall axis. The CD starts off with three fab collaborations: "'Bout It" by Yung Joc and 3LW, Ciara and Chamillionaires fantastically elastic "Get Up" (which may be even better than Ciaras smash hit "1, 2"), and Sean Paul and Keyshia Cole's "(When You Gonna) Give It Up to Me." But the three most dance-inducing tracks are solo ones: Kelis is at her funkiest on "80's Joint," and it's practically impossible to stay still during Drew Sidora's bouncy "Til the Dawn" (including an Earth, Wind & Fire sample) and Jamie Scott's Prince-esque "Made." Don't miss, tucked toward the end, Deep Inside's "Lovely" and Gina René's "U Must Be," two wickedly catchy slow songs. --Elisabeth Vincentelli

The Complete Bob Marley & The Wailer...