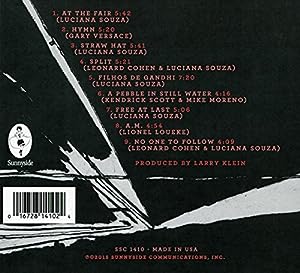 $12.78
As of 2021-06-21 02:52:19 UTC (more info)
Not Available - stock arriving soon
Buy Now from Amazon
Product prices and availability are accurate as of 2021-06-21 02:52:19 UTC and are subject to change. Any price and availability information displayed on http://www.amazon.com/ at the time of purchase will apply to the purchase of this product.
See All Product Reviews

Speaking In Tongues is a suite of musical poetry with the theme of language at its core. Luciana Souza s stunning new album for Sunnyside Records draws on the talents of four of the most creative musicians working in Jazz today; players who, along with Luciana, come from five different places on the planet, and have five different languages as their native tongues. Together with the extraordinary vision of producer Larry Klein, they have melded their creative voices into an exciting new tributary of Jazz; one that breaks down compositional and sonic walls, and treads onto fresh ground in every sense. The Grammy Award winning vocalist and composer describes her new project as a musical inquiry into language and conversation.

Luciana Souza grew up in Brazil in a musical household where ever-present musicians and friends introduced her to the joy of expressing herself through participation in communal music making. It was her godfather, the eclectic Brazilian legend Hermeto Pascoal, who encouraged her to sing along with instruments and enmesh herself in the ensemble. As she evolved as a singer, Luciana understood that the primary force in Jazz was listening, which is the basis for learning any language. Luciana s musical education and development has taken her from Brazil to Boston, New York, and now Los Angeles. Her artistry reflects her distinctive upbringing and her devotion to developing music that communicates without boundaries - her ventures into Jazz and Brazilian, as well as Classical and Contemporary orchestral music, have always been imbued with a sense of adventure and respect for tradition, while consistently searching for the new.

Speaking In Tongues brings together Souza and a tremendous new ensemble, whose members she had never previously worked with, creating a unique and moving collection of new pieces. Equality is paramount in language - for people to understand each other truly, they have to feel permission to share, to create, Luciana says. Hailing from Benin, West Africa, guitar master Lionel Loueke has a remarkable voice, combining Jazz and African music, along with a childlike openness to experimentation. Swiss born harmonica virtuoso Grégoire Maret serves as an exceptional vocal foil because of his extraordinary talent and the singularity of his instrument s sound, one that for Souza is a metaphor for the recurring presence of the accordion in Brazilian music. Massimo Biolcati brings his incredibly empathetic sensibility and cosmopolitan taste and experience to the bass, as well as a bridge that emanates from his many years as a member of Loueke s trio. Drummer Kendrick Scott embodies the voice and attitude of a generation who grew up listening to everything, with no boundaries around the music that we call Jazz, but who also approaches this expanse with a focus on refinement and musicality.