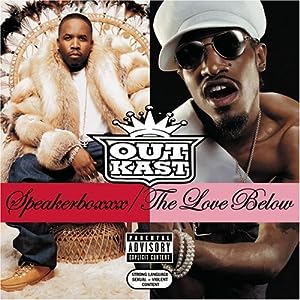 $9.70
As of 2022-11-22 04:33:29 UTC (more info)
Not Available - stock arriving soon
Buy Now from Amazon
Product prices and availability are accurate as of 2022-11-22 04:33:29 UTC and are subject to change. Any price and availability information displayed on http://www.amazon.com/ at the time of purchase will apply to the purchase of this product.
See All Product Reviews

2003 two CD release from the Hip Hop duo that contains a quasi solo album from each member (Big Boi and Dre 3000).

At a time when experimentation is taboo in most overground rap, that’s all Outkast seem intent on executing. Firstly, this double CD has no cohesive link, other than the fact that it sounds like a pair of solo albums stitched together to demo exactly how Andre’s yin works to augment Big Boi’s yang. Andre 3000’s Love Below disc rates as the more eclectic of the two, given that he’s turned in his emcee credentials to become a full-on funk-soul-jazz vocalist who mostly sings about items of love ("Happy Valentine's Day"), carnal lust ("Spread"), and female adoration ("Prototype"). Minus the big band schmaltz of "Love Hater" and cheesy cover jobs ("My Favorite Things"), Andre’s disc is sick (meaning great). As is to be expected, the Big Boi disc is less arty, more gangsta and worldly, and features the less-progressive guest raps of ATL crunk purveyors Lil’ Jon and The Eastside Boyz ("Last Call") and Jay-Z who rhymes the hook on "Flip Flop Rock". Unlike Big Boi, Andre keeps his collabos to a minimum, once crooning alongside Norah Jones on the cool yet sappy "Take Off Your Cool", and once with Kelis. Boi fulfills his Dungeon Family duty with flying colors by flipping some dirty southern up-tempo raps over electro beats on "GhettoMusick". By the time Cee-Lo sermonizes on "Reset", Speakerboxx and Love Below rate mostly as majestic and inspiring, with the remaining 23 per cent being just plain incredible --Dalton Higgins