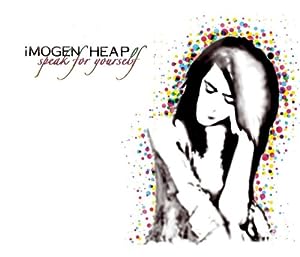 $5.70
As of 2022-09-27 23:22:10 UTC (more info)
Not Available - stock arriving soon
Buy Now from Amazon
Product prices and availability are accurate as of 2022-09-27 23:22:10 UTC and are subject to change. Any price and availability information displayed on http://www.amazon.com/ at the time of purchase will apply to the purchase of this product.
See All Product Reviews

Whether partnered with Guy Sigsworth as Frou Frou, or on her own, Imogen Heap is an enormously gifted singer, songwriter, producer, keyboardist, and programmer. She does it all here on her second solo CD which showcases her remarkable talents. Comparison's have been made to Bjork, Alanis Morrisette, Joni Mitchell and Annie Lennox, among others, but no one can hold a candle to Imogen Heap. Her electronic programming and keyboarding are so textured and layered, you will hear something new with each and every listening. RCA. 2005.

If the voice sounds familiar, that may be because a couple of tracks have been featured on The O.C., while Frou Frou's "Let Go" appeared in Garden State. (Frou Frou is a collaboration between Heap and producer Guy Sigsworth.) Her sophomore release, after a UK-only debut, is a fine showcase for the singer/songwriter's swooping vocals. Her style, which incorporates layers of multi-tracking, lies somewhere between Sinead O'Connor's banshee howl and Jem's more delicate musings. There's more of a groove to her ouvre, however. At times, she almost sounds like Norway's Annie--by way of Kate Bush. The overall effect is plush and luxurious, if occasionally generic (a more stripped-down approach would really allow that instrument to shine). The one song that doesn't quite fit the electro-pop pattern is the vocoder-saturated "Hide and Seek," in which Heap enters Laurie Anderson territory (specifically 1982's "O Superman"). It's a risk that pays off, although its placement midway through the recording threatens to throw the balance off. (It would have made more sense at the end.) Aside from writing and singing, the multi-talented musician also recorded and produced Speak for Yourself. --Kathleen C. Fennessy