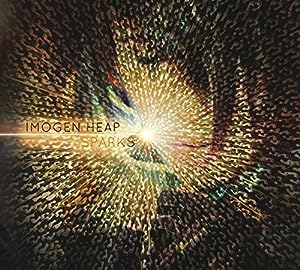 $11.59
As of 2022-11-18 02:36:27 UTC (more info)
Not Available - stock arriving soon
Buy Now from Amazon
Product prices and availability are accurate as of 2022-11-18 02:36:27 UTC and are subject to change. Any price and availability information displayed on http://www.amazon.com/ at the time of purchase will apply to the purchase of this product.
See All Product Reviews

Sparks has been on a well traveled journey, one which Heap began at 6am 14 March 2011, with a live stream from her home studio in a small village on the outskirts of London, gathering 'sound seeds' from fans and weaving them together to form the first song (Lifeline). Fast forward, 4 continents later, a dozen related projects and 14 tracks, the album cover artwork was then completed by those who pre-ordered the limited edition, super deluxe box set by sending in their footprints! The stunning piece of artwork and packaging, designed and developed over the past three years by Imogen and her creative team with CSV (the company behind Radiohead s special packaging) it is the very first time that Imogen has released such a super deluxe package.

Says Heap, "The album began with someone sending in the sound of striking a match for what became Lifeline in March 2011. I then dived into the most immense, intense creative 2 and a half years of my life that took me all over the planet, collaborating on so many projects with so many people and often totally spontaneously. The album is then in some ways for me grounded with fans' footprints bringing the finishing touch for the album art, as so many of them came along for the ride."

While working on "Sparks," Heap turned songs into projects and projects into songs, to bring her out of her studio and 'let life in' rather than postponing things until her album was done. This fresh approach found Imogen collaborating with everyone from her fans to unsuspecting passers-by, gardeners to filmmakers, scientists to newspaper journalists and brings us her most diverse and daring body of work to date. From the River Thames (You Know Where To Find Me) to 5000 feet up in the Himalayas (Climb to Sakteng, Cycle Song), from her local community garden (Neglected Space) to 6 weeks in the Chinese metropolis of Hangzhou (Xizi She Knows), Heap was soaking it up, writing, developing, recording and producing. Sounds of a dishwasher door to a Bhutanese dranyen, the voice of a crumbling wall to 700 fans' becoming a spoken word chorus. Some of Heap's projects include her brilliant Mi.Mu Gloves, developed over this album period with an incredible team of scientists, engineers and artists (Me The Machine) and dabbled in generative and reactive music with music app developers RJDJ (Run-Time) connected to a jogging app. From the deeply personal love songs Propeller Seeds and Entanglement to the crowd sourced response to the Sendai earthquake (Lifeline), her trademark honesty runs through the album.