Sounds & Cries of the World 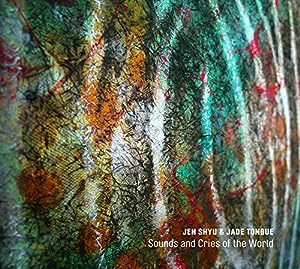 Sounds & Cries of the World

$12.32
As of 2021-06-24 13:54:42 UTC (more info)
Not Available - stock arriving soon
Buy Now from Amazon
Product prices and availability are accurate as of 2021-06-24 13:54:42 UTC and are subject to change. Any price and availability information displayed on http://www.amazon.com/ at the time of purchase will apply to the purchase of this product.
See All Product Reviews

Vocalist, composer, multi-instrumentalist Jen Shyu is best known for carving out new improvisational terrain for the voice through integrating traditional music discovered through rigorous research and fieldwork. Sounds and Cries of the World is a culmination of her travels through East Timor, Korea, Indonesia, and Taiwan, where she has spent months and years in each place immersing herself in the language and forgotten musics of various indigenous cultures. She has done this while continuing to be an integral member of saxophonist Steve Coleman s Five Elements, appearing most recently on the critically lauded release Synovial Joints (Pi, 2015). Sounds and Cries of the World features the remarkable contribution of rising star trumpeter Ambrose Akinmusire, violist Mat Maneri, and drummer Dan Weiss. Utilizing the musical form, dream-like narrative, and language of these various cultures, the result is utterly unique. The New York Times said that the effect 'could remind you of ancient court music or Joni Mitchell. Everything Shyu did every turn, every breath came with mindful emphasis...'
Rather than pursuing the traditional path for a jazz singer, Shyu is seeking her own way, fearlessly using her prodigious technique to create art with no limits with regard to musical genre. The Guardian has called her 'a remarkable phenomenon' and The Wall Street Journal 'invigorating and enigmatic'. Shyu is well known for her complete vocal control, her deep sense of rhythm, and highly developed ear for lyrical and melodic improvisation. In addition to English, she sings in new improvised languages and existing ones (Indonesian, Javanese, Taiwanese, indigenous Taiwanese languages, Spanish, Portuguese, Mandarin, Tetum, Korean, among others). The result is music that is impassioned, ecstatic, and ultimately transformative.