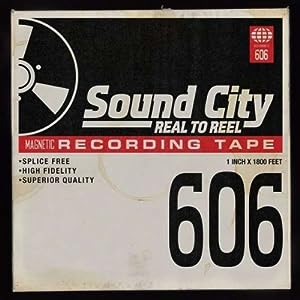 $5.55
As of 2021-07-24 17:50:51 UTC (more info)
Not Available - stock arriving soon
Buy Now from Amazon
Product prices and availability are accurate as of 2021-07-24 17:50:51 UTC and are subject to change. Any price and availability information displayed on http://www.amazon.com/ at the time of purchase will apply to the purchase of this product.
See All Product Reviews

SOUND CITY--REAL TO REEL is a brand new collection of all-new all-original songs, each one composed and recorded exclusively for the film within its own 24-hour session on that console after it was reinstalled in Grohl and his Foo Fighters' own 606 Studios. The new tracks--featuring an amazing and idiosyncratic cast of collaborators including Paul McCartney, Grohl's former Nirvana and current Foo Fighters bandmates, Stevie Nicks, Rick Springfield, Trent Reznor, Joshua Homme of Queens of the Stone Age, Rick Nielsen of Cheap Trick, Lee Ving of Fear, Corey Taylor of Slipknot, Brad Wilk and Tim Commerford of Rage Against The Machine and more--passionately exemplify SOUND CITY's celebration of the human element of musicianship and recording in an increasingly digital world.

SOUND CITY, the film, was conceived by Grohl after purchasing the legendary custom-built Neve 8028 recording console from Sound City Studios last year. The board, built in 1972, is considered by many to be the crown jewel of analog recording equipment, having recorded such artists as Neil Young, Fleetwood Mac, Tom Petty, Johnny Cash, Guns and Roses, Metallica, NIN, Rage Against The Machine and countless other musical legends over the past 40 years.

Call Me By Your Name (Original Motion Pi...