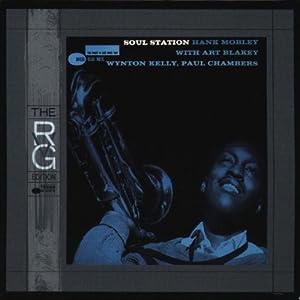 $7.14
As of 2021-10-19 16:56:38 UTC (more info)
Not Available - stock arriving soon
Buy Now from Amazon
Product prices and availability are accurate as of 2021-10-19 16:56:38 UTC and are subject to change. Any price and availability information displayed on http://www.amazon.com/ at the time of purchase will apply to the purchase of this product.
See All Product Reviews

Soul Station is Hank Mobley's acknowledged masterpiece. Mobley's hot, brilliantly constructed solos have a smooth sound and an easy feel. With Miles Davis at the time, Mobley is joined by bandmates Wynton Kelly and Paul Chambers along with a magnificent Art Blakey. A true classic.

This 1960 session broke the usual Blue Note quintet mold, with Mobley's tenor saxophone featured with just a rhythm section, one that happened to be the best of the era. Pianist Wynton Kelly and bassist Paul Chambers were working regularly with Mobley in Miles Davis's band, while the explosive drummer Art Blakey had worked with him in the original, cooperative form of the Jazz Messengers, and the familiarity shows. Blue Note had a reputation for producing "meat 'n' potatoes" jazz, and no musician would better fit the description than Mobley, who went about the task of making music with a workmanlike focus and a consistency that didn't attract nearly the attention it deserved. Mobley was one of the most talented saxophonists of his generation, a superbly lyrical artist who blended an inventive tunefulness with taut rhythmic attentiveness. The flowing blues of the title track is a particularly fine example of his art. And to say this session is exemplary would be an understatement. --Stuart Broomer