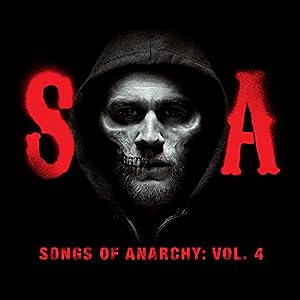 $5.45
As of 2022-01-21 11:18:48 UTC (more info)
Not Available - stock arriving soon
Buy Now from Amazon
Product prices and availability are accurate as of 2022-01-21 11:18:48 UTC and are subject to change. Any price and availability information displayed on http://www.amazon.com/ at the time of purchase will apply to the purchase of this product.
See All Product Reviews

Presenting the fourth installment of music to FX's highest rated series, Sons of Anarchy. Songs of Anarchy: Volume 4 kicks off with a glorious Forest Rangers cover of Queen's "Bohemian Rhapsody" featuring The White Buffalo, Billy Valentine & Frankie Perez, and includes two Bob Dylan covers; an instrumental version of "All Along The Watchtower," and Amos Lee & The Forest Rangers rendering a heart-wrenching version of "Boots Of Spanish Leather." Golden Globe® Award winning actress/singer Katey Sagal is featured along with The Forest Rangers on "Greensleeves." This collection also includes the special finale track, "Come Join the Murder" by The White Buffalo & The Forest Rangers, and "Make It Rain" by Ed Sheeran from the shocking 'Red Rose' episode. A second finale track, "Can t Help Falling in Love," by Frankie Perez & The Forest Rangers, will be exclusively available on the physical release.

Sons of Anarchy was created by Kurt Sutter, who also serves as Executive Producer along with John Linson, Art Linson and Paris Barclay. The series is produced by FX Productions and Fox 21 and stars Charlie Hunnam, Ron Perlman and Katey Sagal.