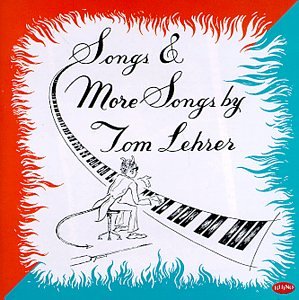 $10.08
As of 2022-11-29 00:07:51 UTC (more info)
Not Available - stock arriving soon
Buy Now from Amazon
Product prices and availability are accurate as of 2022-11-29 00:07:51 UTC and are subject to change. Any price and availability information displayed on http://www.amazon.com/ at the time of purchase will apply to the purchase of this product.
See All Product Reviews

A collection of just about everything the reclusive master of social and political satire has ever recorded! Includes his ultrarare 1953 debut album, Songs By Tom Lehrer, the equally hard-to-find 1959 release More Of Tom Lehrer, plus rare cuts and a previously unreleased 1996 recording of "I Got It From Agnes." Also features a booklet containing Dr. Demento-penned liner notes and an exclusive interview with Lehrer himself!

In the wake of the '80s comedy boom that made casual obscenity and bodily functions safe for TV, a listen to these '50s classics from a piano-playing Harvard grad student with a thin singing voice sounds tame if not quaint. Yet Lehrer's first two self-produced albums, among the first generation of comedy LPs, remain beloved gems of musical parody, and noteworthy for their original success in an era when their topics were strictly taboo for broadcast media. He kids cold war paranoia ("We Will All Go Together When We Go"), sends up then-hip folk revivalists with a cheerful murder ballad ("The Irish Ballad"), and gets laughs out of incest ("Oedipus Rex"), drugs ("The Old Dope Peddler"), and racism ("I Wanna Go Back to Dixie"). Closer to Gilbert & Sullivan (whom he in fact raids for one melody) than Def Comedy Jams, Lehrer can still raise a modern frisson when he plays necrophilia as romance ("I hold your hand in mine dear, I press it to my lips/ I take a healthy bite from your dainty fingertips..."). --Sam Sutherland

What Becomes a Semi-Legend Most