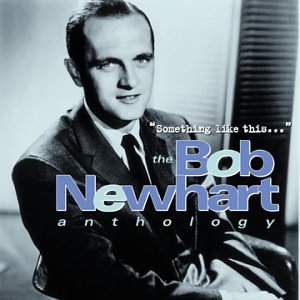 $18.98
As of 2023-01-22 23:16:16 UTC (more info)
Not Available - stock arriving soon
Buy Now from Amazon
Product prices and availability are accurate as of 2023-01-22 23:16:16 UTC and are subject to change. Any price and availability information displayed on http://www.amazon.com/ at the time of purchase will apply to the purchase of this product.
See All Product Reviews

24 routines-*2 1/2 hours*!-from the all-time classic albums Bob recorded for Warner Bros. during the '60s! Remember these brilliant routines? Abe Lincoln vs. Madison Ave.; The Cruise of the U.S.S. Codfish; Ben Franklin in Analysis; The Grace L. Ferguson Airline (and Storm Door Co.); Ledge Psychology; Daddy of All Hangovers , and more.

Part of what Bob Newhart mastered, earlier on stand-up albums like The Button-Down Mind of Bob Newhart and The Button-Down Mind Strikes Back! and later on his long-running TV series The Bob Newhart Show and Newhart, was capturing a brand of Everyman neuroses and heightening it, bringing mundane, common scenarios into the realm of the absurd--and the absurdly funny. Newhart also perfected playing a character involved in a conversation with the other party in absentia, as in one of his most famous routines, "King Kong," in which he plays the part of an Empire State Building security guard who calls his boss the night King Kong makes his famous ascent. ("Yes, sir, I looked in the handbook index under 'unauthorized personnel' and 'people without passes' and 'apes,' and 'ape's toes,' but it's not in there....") Something Like This... is a generous sampling of Newhart's best stand-up bits, and while some of his topics--airplanes, hating to fly--have now been so overdone as to be comic faux pas, rather than making his material seem dated they often serve to demonstrate just how rare a talent he is simply because the routines still elicit involuntary snorts of laughter some 30 years later. --Mark Hunstman

Life of the Last Prophet

In Living Black and White