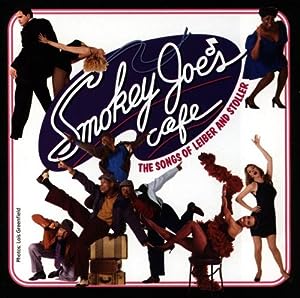 $31.92
As of 2021-09-25 04:07:48 UTC (more info)
Not Available - stock arriving soon
Buy Now from Amazon
Product prices and availability are accurate as of 2021-09-25 04:07:48 UTC and are subject to change. Any price and availability information displayed on http://www.amazon.com/ at the time of purchase will apply to the purchase of this product.
See All Product Reviews

As good as Pomus and Gordy were, they can't compare with the premier rock & roll songwriters of the pre-Beatles era: Jerry Leiber, Mike Stoller, Chuck Berry, and Percy Mayfield. The team of Leiber (the lyricist) and Stoller (the composer) created such enduring standards as "Kansas City," "Hound Dog," "Stand By Me," "Spanish Harlem," "Jailhouse Rock," and many more. Those songs and 33 more were assembled into a bookless Broadway musical called Smokey Joe's Cafe, which was nominated for eight Tony Awards. If this soundtrack album is any indication, the show was an abomination, an act of self-betrayal by Leiber and Stoller, who not only participated in putting the show together but also co-produced the album with Arif Mardin. Instead of remaining true to the songs' rock & roll roots, the soundtrack producers have allowed the obscure stage performers to commit Broadway's worst sins: excessive earnestness, undernourished rhythms, and bombastic over-singing. Everyone in the cast has a good singing voice, but no one has a distinctive musical personality. Michael Park's Presley parody on "Jailhouse Rock," B.J. Crosby's confusion of vocal power for vocal attitude on "Hound Dog," and Victor Trent Cook's syrupy version of "I (Who Have Nothing)" prove Broadway chorus dancers are no substitute for real rock & roll singers. --Geoffrey Himes

only $5.71
Not Available
View Add to Cart