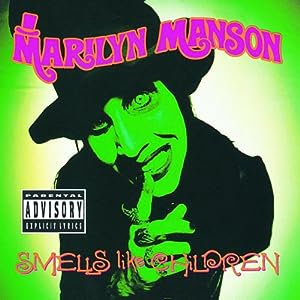 $5.09
As of 2022-11-17 14:47:43 UTC (more info)
Not Available - stock arriving soon
Buy Now from Amazon
Product prices and availability are accurate as of 2022-11-17 14:47:43 UTC and are subject to change. Any price and availability information displayed on http://www.amazon.com/ at the time of purchase will apply to the purchase of this product.
See All Product Reviews

Mostly a collection of remixed tracks from Portrait of an American Family and samples swiped from talk-radio dialogue, Smells Like Children is how Marilyn Manson passed the time prior to beginning work on Antichrist Superstar. Of note among the remixes is Tony Wiggins's acoustic country "White Trash" version of "Cake and Sodomy." This is really a keeper, though, for Manson's clever choice of covers, including an authentically creepy interpretation of Eurythmics' "Sweet Dreams" and the shot-in-the-arm he gives to Patti Smith's "outside of society" anthem, "Rock 'N' Roll Nigger." (Attention trivia buffs: Manson's unrestrained reworking of Howling Wolf's "I Put a Spell on You" was later included on the soundtrack to David Lynch's Lost Highway.) --Gail Worley