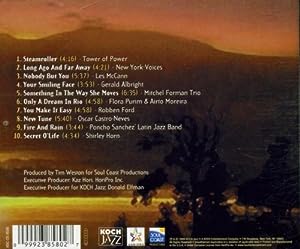 $159.99
As of 2021-02-22 08:05:42 UTC (more info)
Not Available - stock arriving soon
Buy Now from Amazon
Product prices and availability are accurate as of 2021-02-22 08:05:42 UTC and are subject to change. Any price and availability information displayed on http://www.amazon.com/ at the time of purchase will apply to the purchase of this product.
See All Product Reviews

In trying to "bridge the gap between pop/folk music and jazz," Tim Weston--the producer of this jazz homage to singer-songwriter James Taylor--made what must have seemed a logical choice. After all, Taylor has turned out a steady stream of solid melodies and some hits; more important, a fair number of modern jazz musicians (most prominently, Pat Metheny) have expressed admiration for his craftsmanship. Alas, craftsmanship and strong melodies aren't enough to make Taylor's songs solid vehicles for improvisation or jazz interpretation. Taylor's songs avoid the chromaticism that distinguishes most modern jazz (in other words, they tend to stick to "the white notes" of the piano); they also contain only modest rhythmic variety. Perhaps this explains the tepid and unconvincing nature of most of the music here--despite the presence of such versatile artists as percussionist Poncho Sanchez, soul-sax king Gerald Albright, pop-jazz veterans Tower of Power, and singer-keyboardists Les McCann and Shirley Horn.

Surprisingly, the vocalists prove least successful in transforming Taylor's Music. The lyrics act as a further brake on the liberties these musicians might have taken to cast Taylor's songs in jazz hues. Only three of the artists here manage to fulfill the album's intriguing premise. The vocal choir New York Voices uses rich harmonies to inhabit "Long Ago and Far Away," while two Brazilian tracks shine: "Only a Dream in Rio" (Flora Purim and Airto Moreira), "New Tune," elegantly arranged for a small chamber-winds ensemble led by guitarist Oscar Castro-Neves. As for the rest of the album, it could have used a little more fire and a lot less rain. --Neil Tesser

To Beny More With Love (feat. The Charli...