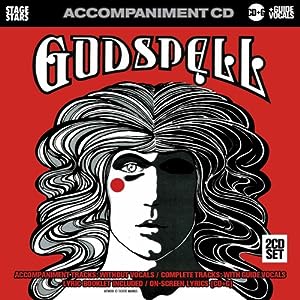 $21.50
As of 2021-07-29 09:57:00 UTC (more info)
Not Available - stock arriving soon
Buy Now from Amazon
Product prices and availability are accurate as of 2021-07-29 09:57:00 UTC and are subject to change. Any price and availability information displayed on http://www.amazon.com/ at the time of purchase will apply to the purchase of this product.
See All Product Reviews

Our accompaniment/karaoke CD of songs from Godspell features 32 tracks. Tracks 1-16 contain the background tracks and guide vocals; tracks 17-32 contain the accompaniment tracks alone. This album is a re-recording in the original show key and show tempo.

This album plays in any CD player. In a karaoke machine, lyrics will appear on-screen. A lyric booklet is included.

Karaoke Hits - Sing The Hits Of The Judd...