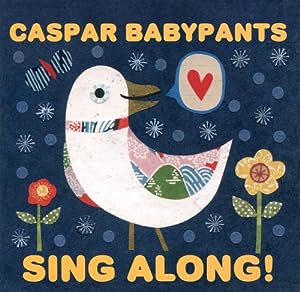 $10.89
Not Available - stock arriving soon
Buy Now from Amazon
Product prices and availability are accurate as of and are subject to change. Any price and availability information displayed on at the time of purchase will apply to the purchase of this product.
See All Product Reviews

Simple, fun, acoustic, sing along songs for kids ages 0-6 and their parents is what the fourth album from Caspar Babypants is all about. SING ALONG! is an invitation to sing and smile for the whole family.

Caspar Babypants is also known as Chris Ballew, the twice Grammy nominated songwriter and lead singer for the Seattle rock and roll band The Presidents of the United States of America. Caspar Babypants makes high quality simple music with integrity that is rooted in American, European and African folk traditions mixed with a light sense of humor and imaginative fun. Influences include Dan Zanes, Ella Jenkins, Elizabeth Mitchell, Spider John Koerner, The Beatles and Beethoven. Themes include snowmen, musical spiders, fleas with dogs, butterfly truck drivers, helicopters, echoes, daring cats and more. There are original tunes mixed with traditional songs that have been updated in inventive and tasteful ways. Music for the family to sing TOGETHER!!