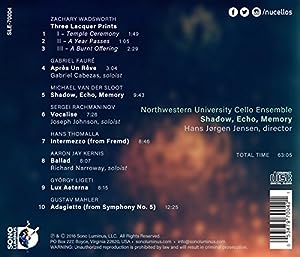 $3.98
As of 2021-12-02 08:40:33 UTC (more info)
Not Available - stock arriving soon
Buy Now from Amazon
Product prices and availability are accurate as of 2021-12-02 08:40:33 UTC and are subject to change. Any price and availability information displayed on http://www.amazon.com/ at the time of purchase will apply to the purchase of this product.
See All Product Reviews

Shadow, Echo, Memory is a collection of 19th, 20th, and 21st century music arranged and written for Cello Ensemble. It explores the inherent vocal quality of the cello through a conversation between works either originally composed for voice, or inspired by vocal traditions. This varied group of compositions explores music's potential to express textures of light and dark, to bring to life sounds and images from another time, and to aid a listener to revisit their own past. It includes works by: Zachary Wadsworth, Gabriel Fauré, Michael van der Sloot, Sergei Rachmaninov, Aaron Jay Kernis, György Ligeti, Hans Thomalla and Gustav Mahler.

THE NORTHWESTERN UNIVERSITY CELLO ENSEMBLE:
"A beast of a group" (WQXR, Q2 Music), the Northwestern University Cello Ensemble is comprised of current and former cello students at Northwestern University's Bienen School of Music. The Group appeared on The New York Times' Top 25 Classical Recordings of 2015, and The New Yorker's Top 10 Classical Recordings of 2015

only $2.50
Not Available
View Add to Cart

Ultimate Most Relaxing Classical Music i...