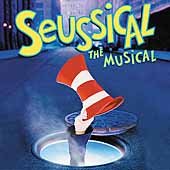 $15.79
As of 2022-11-29 03:45:29 UTC (more info)
Not Available - stock arriving soon
Buy Now from Amazon
Product prices and availability are accurate as of 2022-11-29 03:45:29 UTC and are subject to change. Any price and availability information displayed on http://www.amazon.com/ at the time of purchase will apply to the purchase of this product.
See All Product Reviews

Seussical: the Musical, which is based on Dr. Seuss's beloved characters, made the news even before its Broadway opening, as tales of disastrous out-of-town tryouts multiplied and creative turmoil abounded. But the show has its fans--Rosie O'Donnell, for one, likes it so much that she jumped in to play the Cat in the Hat for a month while Roger Bart was on vacation. And guess what? As conceived by Ragtime's Lynn Ahrens and Stephen Flaherty, Seussical isn't nearly as bad as its reputation would suggest. While Junior digs the familiar characters, Mom and Dad will notice that "A Day for the Cat in the Hat" could be an outtake from Cabaret--if that show had been rated G, of course--while "It's Possible" suddenly turns into an Elton John-type romp midway through. Easy on the ear and very pop, this is a kid-friendly cast album that won't insult an adult's intelligence. --Elisabeth Vincentelli

only $9.96
Not Available
View Add to Cart

This Is My Town: Songs Of York

only $2.60
Not Available
View Add to Cart