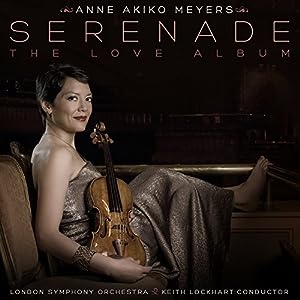 $11.09
As of 2021-06-11 16:29:06 UTC (more info)
Not Available - stock arriving soon
Buy Now from Amazon
Product prices and availability are accurate as of 2021-06-11 16:29:06 UTC and are subject to change. Any price and availability information displayed on http://www.amazon.com/ at the time of purchase will apply to the purchase of this product.
See All Product Reviews

Anne Akiko Meyers Serenade: The Love Album is an exploration of love in all its dimensions, featuring Leonard Bernstein s Serenade and ten world premieres from seven living composer-arrangers. The Serenade is based on a reading of Plato s Symposium, in which seven ancient Greek philosophers debate their thoughts about love at a raucous dinner party. Meyers thought it fitting to pair Serenade with newly commissioned love-inspired music from seven living arrangers.

Serenade is Bernstein s most direct piece about love, his examination of his own romantic life and his reaction to what s discussed in Symposium. Bernstein even went as far as originally titling the work Symposium, but changed the title because it seemed too academic. Speaking to his biographer Humphrey Burton, Bernstein revealed later that he regretted the name change; he wanted listeners to know what the music was based on and why its ideas ran deeper than the music.

To match the seven philosophers who inspired Serenade Anne Akiko Meyers commissioned seven renowned arrangers to create ten works for violin and orchestra from love-inspired music that have been used on stage and film. Crafting the arrangements was a highly collaborative process for Meyers and the composers, and included many Skype rehearsals as the arrangements were finalized. The results are new works Meyers is excited for her listeners to experience: There s Brad Dechter s version of Laura, which opens the door to the nostalgic, film-noir-ish 1940s; his easy, breezy rendition of Gershwin s Someone to Watch Over Me ; and a bluesy, honky-tonk, don't-mess-with-this-woman iteration of Summertime. Gabriel s Oboe, arranged by J.A.C. Redford, has the poignant power to bring the listener to tears with its acrobatic, high notes, before letting you brood in the solemn beauty of Steven Mercurio s take on Emmanuel.

Shifting gears, Matthew Naughtin s tongue-in-cheek Jalousie, bookended by elements of the Tchaikovsky concerto, energetically flows its tango energy into Astor Piazzolla s soul-busting Oblivion (arr. Peter von Weinhardt) and the magical luster of Leigh Harline s When You Wish Upon a Star (arranged by father-son composing duo Steven and Adam Schoenberg). Dechter s soaring reworking of I ll Be Seeing You links nicely with West Side Story s Somewhere to appropriately close the album with another Bernstein favorite.

Meyers Love Album release celebrates the 50th wedding anniversary of her parents. Her father grew up playing jazz clubs in Chicago, where many of the songs on the album were in his repertoire. He still has a near obsession for watching classic movies, so it s no surprise that a passion for cinematic music transferred to hhis daughter. One of Meyers favorite tracks here, Cinema Paradiso s Love Theme, reminds her of the time she and her husband watched the movie together, when they were just beginning their own journey.

only $8.29
Not Available
View Add to Cart