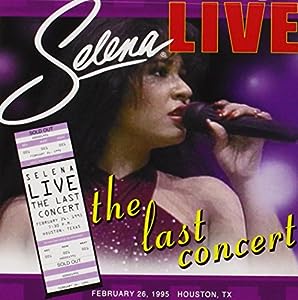 $9.34
As of 2022-11-20 10:55:10 UTC (more info)
Not Available - stock arriving soon
Buy Now from Amazon
Product prices and availability are accurate as of 2022-11-20 10:55:10 UTC and are subject to change. Any price and availability information displayed on http://www.amazon.com/ at the time of purchase will apply to the purchase of this product.
See All Product Reviews

With so many products still flooding the market to commemorate--and cash in on--the tragic death of Tejano queen Selena, it's easy to forget what made her so special in the first place. Beneath all the books, movies, documentaries, and failed musicals, however, is the music. Selena's energy, talent, and joyous spirit are perfectly captured on Live, the Last Concert, the seventh posthumous release from EMI Latin. (A collection of remastered early recordings was released in February by Selena's father, Abraham Quintanilla.) The concert took place February 26, 1995, as part of the Houston Livestock Show and Rodeo, and it has been meticulously remastered for this release. From the introductory "Disco Medley" to the bittersweet cumbia "Como la Flor," Selena works the crowd effortlessly, who respond with thunderous applause and enthusiastic sing-alongs. Every moment on this stellar disc is infused with a thrilling urgency, thanks to Selena's rich, throaty vocals and passionate delivery. The lighthearted "Bidi Bidi Bom Bom" is surprisingly solid in the live format; and Selena transforms "La Carcacha," a fun cumbia about her boyfriend's clunker of a car, into a full-throttle Latin pop epic. There's never a false moment here, and Live, the Last Concert stands as a testament to the light that still illuminates the hopes of Selena and the hearts of her unwavering fan base. It's also one of the year's best releases--in any language. --Joey Guerra