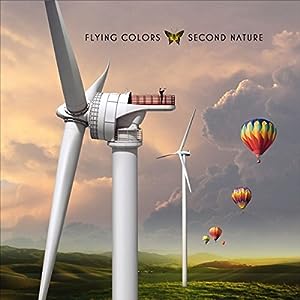 $9.82
As of 2021-04-11 04:26:31 UTC (more info)
Not Available - stock arriving soon
Buy Now from Amazon
Product prices and availability are accurate as of 2021-04-11 04:26:31 UTC and are subject to change. Any price and availability information displayed on http://www.amazon.com/ at the time of purchase will apply to the purchase of this product.
See All Product Reviews

The first album was very much a blind date, Mike Portnoy explains. Although we already had Team Dregs of Steve/Dave and Team Transatlantic of myself/Neal, it was the first time that the five of us had collaborated together as a group. This time there was an existing chemistry, we had not only the prior experiences of making the debut album but also the 2012 tour as well.

Second Nature , the sophomore statement from Flying Colors is released via Mascot Label Group / Music Theories Recordings on September 30, 2014. Sporting stunning artwork from the legendary designer Hugh Syme and bookended by two tracks of truly epic stature Open Up Your Eyes and the multiple-part Cosmic Symphony the album is every bit as breathtaking as the debut.

Portnoy stresses that the music s proggier path was not conscious at all. The drummer continues: Direction was never even discussed. We just did what we do. I think perhaps not having a producer to trim the fat possibly led to the songs breathing and expanding a bit more.

Perhaps Steve Morse sums things up best with the statement: This is an album full of many layers. The more you listen, the more you can hear. It s an album to keep listening to.

Warmer In The Winter

Other Side of Desire