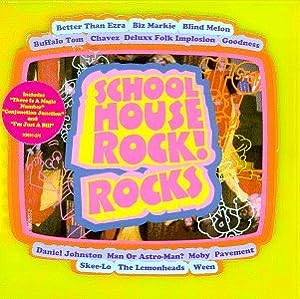 $59.44
As of 2022-09-28 21:55:29 UTC (more info)
Not Available - stock arriving soon
Buy Now from Amazon
Product prices and availability are accurate as of 2022-09-28 21:55:29 UTC and are subject to change. Any price and availability information displayed on http://www.amazon.com/ at the time of purchase will apply to the purchase of this product.
See All Product Reviews

The beauty of Schoolhouse Rock in its original Saturday morning run (1973-85) was that kids watching couldn't tell whether the catchy three-minute cartoon jingles were meant to be commercials, shows, or something else entirely. That enabled overexposed TV youth to learn without realizing it between episodes of Scooby Doo and Fat Albert. Then the Brady Bunch generation became the alternative nation, and the innocence with which they took in these grammar, history, and math lessons was lost. Now comes the obligatory tribute album, Schoolhouse Rock Rocks--pleasant enough, but full of postmodern yuks and missed-the-point nostalgia that aim to celebrate but instead drain the joy from childhood memories.

Though it's somewhat interesting to hear Pavement turn "Mo More Kings" into lo-fi krautrock or Moby make "Verb: That's What's Happening" into industrial techno-pop, the performers who most successfully preserve Schoolhouse Rock's edutainment viability are those who are most cartoonish to begin with: Ween ("The Shot Heard 'round the World"), Biz Markie ("The Energy Blues"), and Daniel Johnston ("Unpack Your Adjectives"). The problem remains, nonetheless: Any revamping of these songs implies Schoolhouse Rock somehow needed to be made hipper. That none of these songs is better than its original proves how very unhip '70s kids have grown up to be. --Roni Sarig

Hot Potatoes!: The Best of The Wiggles

only $3.58
Not Available
View Add to Cart

Lady and the Tramp (Legacy Collection)