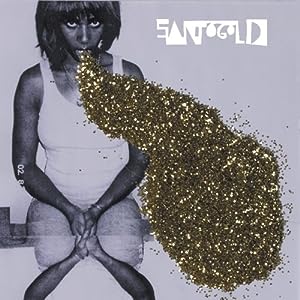 $12.01
As of 2021-11-29 20:29:49 UTC (more info)
Not Available - stock arriving soon
Buy Now from Amazon
Product prices and availability are accurate as of 2021-11-29 20:29:49 UTC and are subject to change. Any price and availability information displayed on http://www.amazon.com/ at the time of purchase will apply to the purchase of this product.
See All Product Reviews

Don't call Santi White an R&B artist: on her debut album Santogold, this former music biz A&R and pop songwriter for hire is challenging race stereotypes and playing fast and loose with genre, mashing up dub, punk, and electronics to make an energetic, anger-fuelled music that blurs the lines between the dancefloor and the moshpit. Comparisons to MIA hold some water, especially on the bullish "Creator" (it's worth noting that Santogold features production turns from sometime MIA collaborators Diplo and Switch). For the most part, though, Santogold's debut follows a quite different path. "L.E.S Artists" is stirring new-wave pop that builds to grand, tearful choruses reminiscent of the Yeah Yeah Yeahs, while "You'll Find a Way" and "Say Aha" are propulsive ska-pop numbers that hark back to its creator's previous band, Bad Brains-influenced punks Stiffed. But it's not just skilful genre-skipping to recommend this record, though: White is the rare vocalist that can sound empowered and vulnerable within the space of the same song, and it's her force of character that places Santogold ahead of the pack. --Louis Pattison

From Jamaica With Reggae