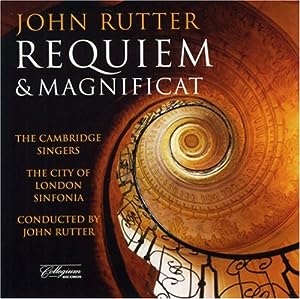 $60.00
As of 2021-04-21 15:03:27 UTC (more info)
Not Available - stock arriving soon
Buy Now from Amazon
Product prices and availability are accurate as of 2021-04-21 15:03:27 UTC and are subject to change. Any price and availability information displayed on http://www.amazon.com/ at the time of purchase will apply to the purchase of this product.
See All Product Reviews

Two of John Rutter's most popular large-scale choral works are paired in this bargain-priced CD. Requiem, his first composition written without being commissioned, is a convincing affirmation of Christian doctrine on death and eternal life. It is also a substantial and sincere work that strives to be widely appealing while preserving a spiritual context centered on themes of light and consolation. Highlights include "Out of the Deep," its modal tune and harmonies giving it the flavor of a spiritual, and the wonderfully gentle and restful 23rd Psalm. Rutter personalizes his Requiem by adding movements not traditionally part of the Requiem Mass--passages from the 1662 Book of Common Prayer, for instance--and this proves to be an effective strategy. Rutter's own, first-class Cambridge Singers are superb, as usual, and soloist Caroline Ashton steals the show with her heavenly Pie Jesu. The Magnificat shows Rutter at his most engaging, thoughtful, and adept. His usual canny sense of tunefulness and rhythmic rightness, flavored with splashes of pop harmony, accomplish his purpose in the Magnificat: to depict Mary's prayer as a celebratory occasion rather than a somber one. --David Vernier

only $8.87
Not Available
View Add to Cart