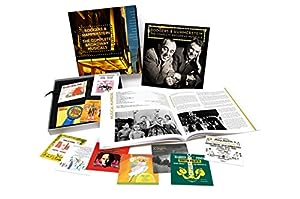 $125.96
As of 2021-07-27 23:07:34 UTC (more info)
Not Available - stock arriving soon
Buy Now from Amazon
Product prices and availability are accurate as of 2021-07-27 23:07:34 UTC and are subject to change. Any price and availability information displayed on http://www.amazon.com/ at the time of purchase will apply to the purchase of this product.
See All Product Reviews

The Broadway musicals of Richard Rodgers (1902-1979) and Oscar Hammerstein II (1895-1960) belong to the whole world. They were a cultural phenomenon at a time when Broadway was an undisputed kingdom of American culture. The unique music made by Rodgers melodies and Hammerstein's words featured in the groundbreaking shows they wrote between 1943 and 1960 are known to people everywhere. From
this extraordinary body of work, these wonderful songs can now be enjoyed for the first time in one definitive collection of all their musicals.

Rodgers & Hammerstein: The Complete Broadway Musicals is comprised of classic shows which include Oklahama!, The King and I, South Pacific, Carousel and probably the most famous musical of all time, The Sound of Music. Of these, several made appearances on the Billboard charts as this was a time when Broadway was a consistent supplier of songs for the Hit Parade. Rodgers & Hammerstein: The Complete Broadway
Musicals features many original cast performances from legendary Broadway stars such as Julie Andrews, Kaye Ballard, Laura Benanti, Yul Brynner, Liz Callaway, Christine Ebersole, Ezio Pinza, Mary Martin, Audra McDonald, Jerry Orbach, John Raitt, Patrick Wilson, among others.

This deluxe set contains 12 CDs, packaged in sleeves with the original cover art, and a lavish 12" x 12" 100-page book with essays on each show, rare production and behind-the-scenes photos, liner notes by Ted Chapin (President of the Rodgers & Hammerstein office in New York), biographies, and more.