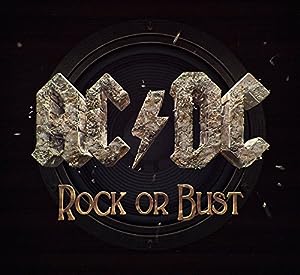 $21.94
As of 2021-04-22 11:25:50 UTC (more info)
Not Available - stock arriving soon
Buy Now from Amazon
Product prices and availability are accurate as of 2021-04-22 11:25:50 UTC and are subject to change. Any price and availability information displayed on http://www.amazon.com/ at the time of purchase will apply to the purchase of this product.
See All Product Reviews

Announced in September, 2013, ROCK OR BUST is the new and highly anticipated studio album from AC/DC will be released in the US on December 2nd, 2014. This is the first album of new AC/DC material since 2008s multi platinum 'Black Ice'.

ROCK OR BUST is available on CD and LP that features very special multi dimensional moving cover art, which gives the illusion of the band s iconic logo exploding as the package is moved in different directions. There will also be a standard package version of the CD available.

Boots No. 1: The Official Revival Bootle...

Take It to the Limit from Universal Repu...

The Colour In Anything

only $5.26
Not Available
View Add to Cart